The Upright Open MRI scan is ideal for claustrophobic patients, those who struggle to lay flat for long periods, and those who are unable to fit comfortably into a conventional closed MRI scanner because of the size. Unlike the most commonly used traditional closed MRI scanners that require a patient to be scanned in a big thin, enclosed tunnel, the open Upright Open MRI, commonly called the Stand-Up MRI, lets the patient sit, bend, stand or even lay down for the scans.

The groundbreaking design of the upright MRI scanner lets patients just walk in and be scanned. The Upright Open MRI is suitable to scan all parts of the body, especially the spine and joints, in the weight-bearing state. The scanner is fitted with an exclusive patient handling system that moves the patient into a magnet and puts the anatomy of interest in the middle of the magnetic field. It also can rotate the vertically-orientated patient into the horizontal position (or anywhere in between). Thus, the patient can be easily scanned lying down as in traditional MRI scanning.

As the patient is typically upright (either sitting or standing in a special chair) and has a clear view in front of them, issues with claustrophobia are efficiently eliminated. It has also been found is that patients who cannot tolerate conventional ‘open’ MR scanners have also been scanned effectively and have reported no uneasiness in the upright system. Upright Open MRI scans are quieter than a closed MRI and are also more child-friendly, making it easier to scan kids, particularly if the parents are present in the environment. 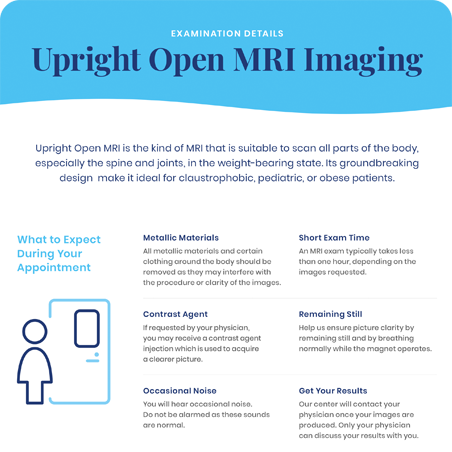 Prepare For Your Appointment

Download this document for specific information on what happens during your Upright Open MRI exam. You can contribute a great deal to the quality and success of your imaging study by learning about the process beforehand.

Online or over the phone, we make it easy to schedule your exam at any of our clinic locations

From scheduling inquires to what types of exams we offer, we’ve got the answers you may need